A short history of nitrile

It’s everywhere in your professional life, you could not work without it and yet most of you know very little about it. No, I’m not talking about your morning coffee, I’m talking about nitrile.

Nitrile itself is not a material, it is rather any organic compound where the carbon and nitrogen atoms are connected by triple bonds. There are therefore several kinds of nitriles. The one used for your gloves is butadiene-acrylonitrile but you understand why we prefer to simply refer to it as nitrile on our boxes! 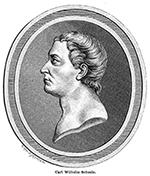 To understand where the nitrile comes from, we have to go back to 1782, in the laboratory of the German-Swedish chemist Carl Wilhelm Scheele. A prominent figure in the history of chemistry, Scheele is known to have notably discovered several chemical elements and compounds, such as citric acid and glycerin, but it is his synthesis of hydrogen cyanide, nearly 80 years after his discovery, which interests us here because it is the first member of the family of nitriles.

Several compounds were subsequently synthesized such as benzonitrile in 1832 (used as a solvent) and acrylonitrile in 1834 (used in the manufacture of nylon) but it was not until the interwar period that the first nitrile rubber appeared. It was in 1934 in the United States that chemists Erich Konrad and Eduard Tschunkur developed our popular elastomer. At the time, it was its resistance to oil and grease combined with a shortage of natural rubber that made it grow in popularity with industries and the military.

Just a few years later, these polymers had completely decommissioned rubber, and by the end of the Second World War, the United States produced more than 800,000 tons of synthetic rubber a year. That’s a lot of gaskets!

It was not until 1991 before the first disposable gloves made of butadiene-acrylonitrile appeared. The growing demand of the industry for an alternative to latex gloves was at the origin of this invention but it is its durability and its great resistance which explains why today, the great majority of the gloves used in the world are nitriles.